Have you read Ben Guterson’s Winterhouse? At the homonymous hotel they are producing highly addictive candy that is world famous.

The name: Flurschen. Since we Germans like to throw around “sch”s and “schchrchsch”s like confetti, this sounds quite familiar to our ears.

Maybe, just maybe the author had a grandma of German descent who also made Lattwersch, a special kind of plum butter (hint: hours and hours of cooking ahead, see recipe below). 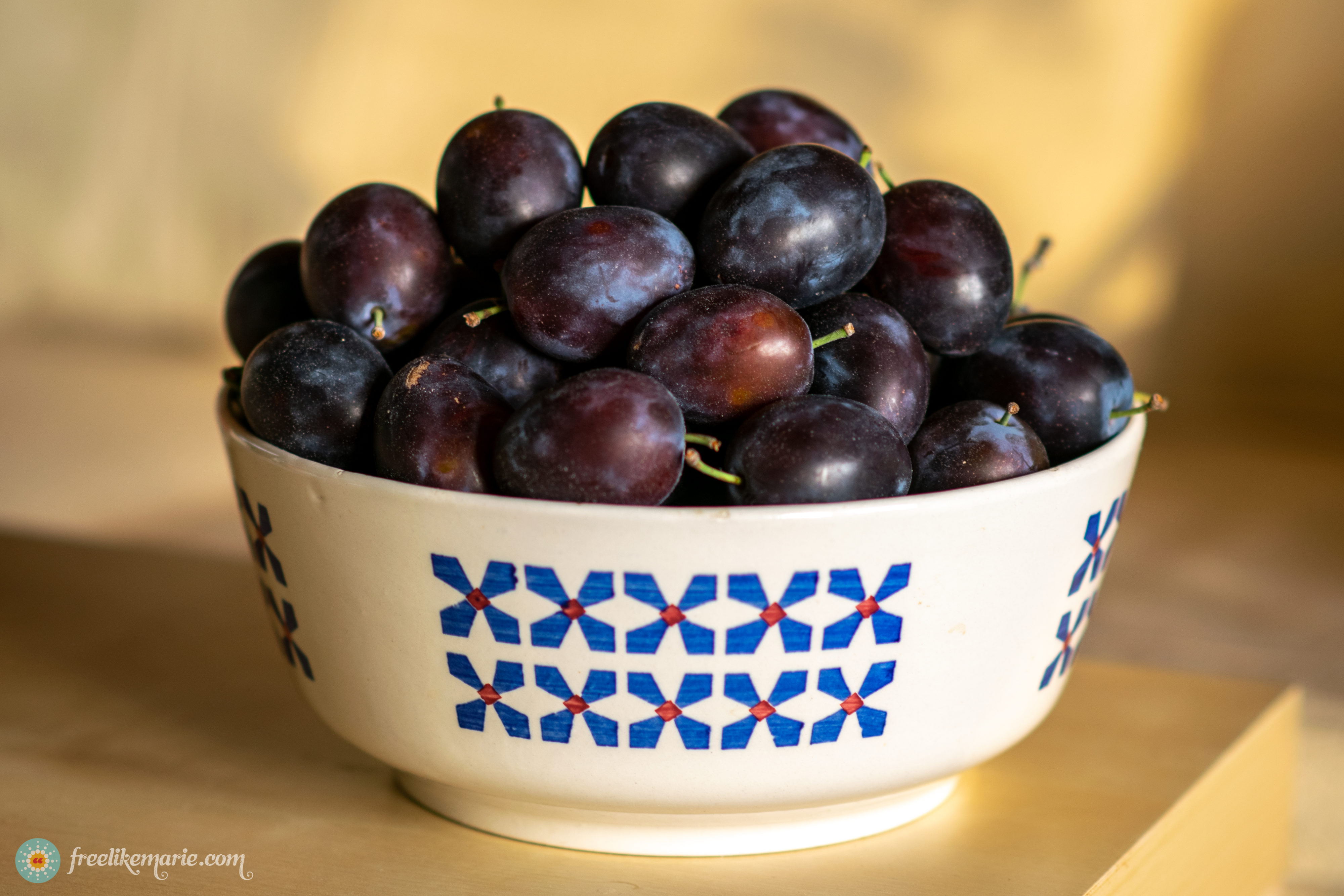 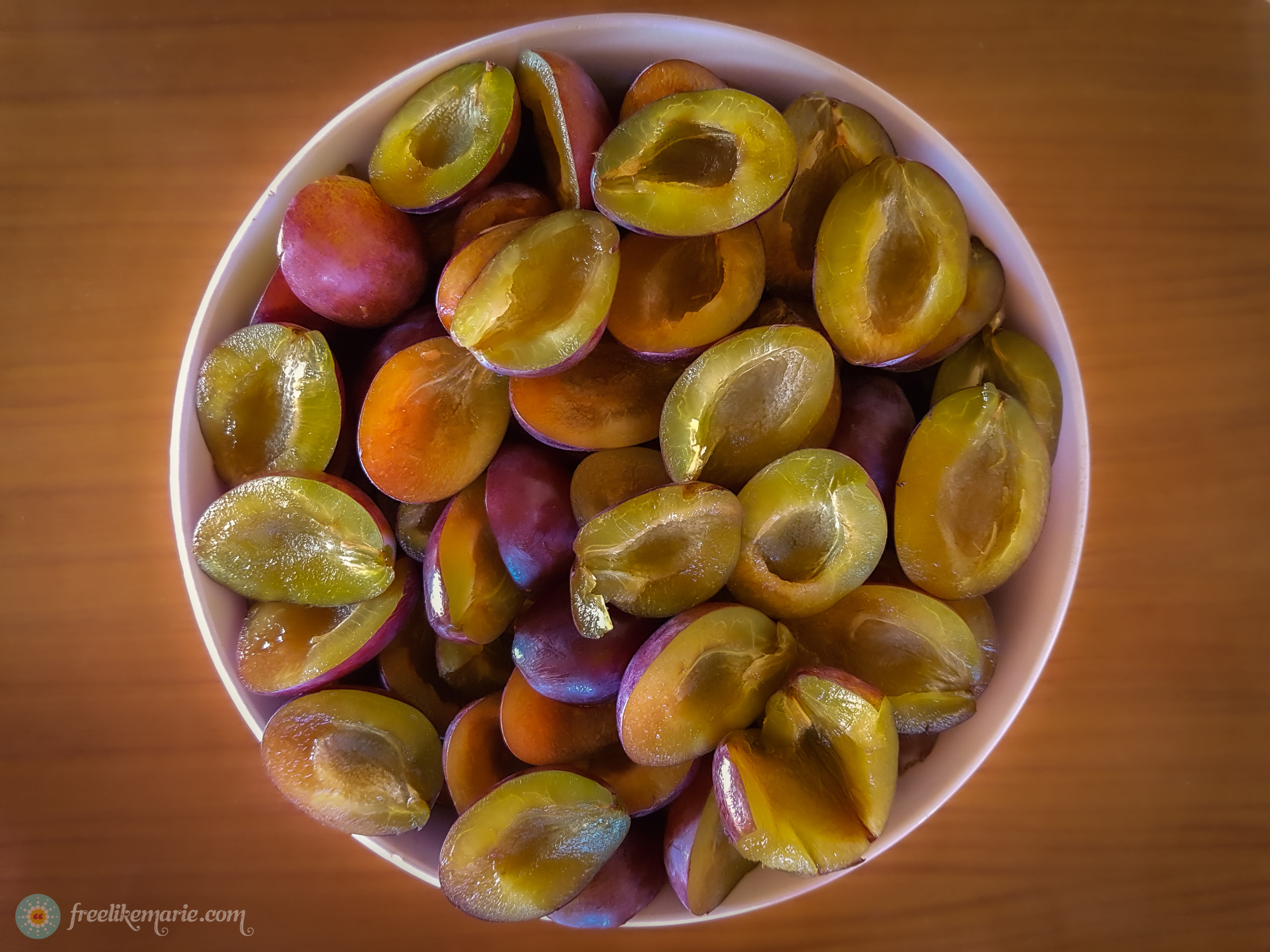 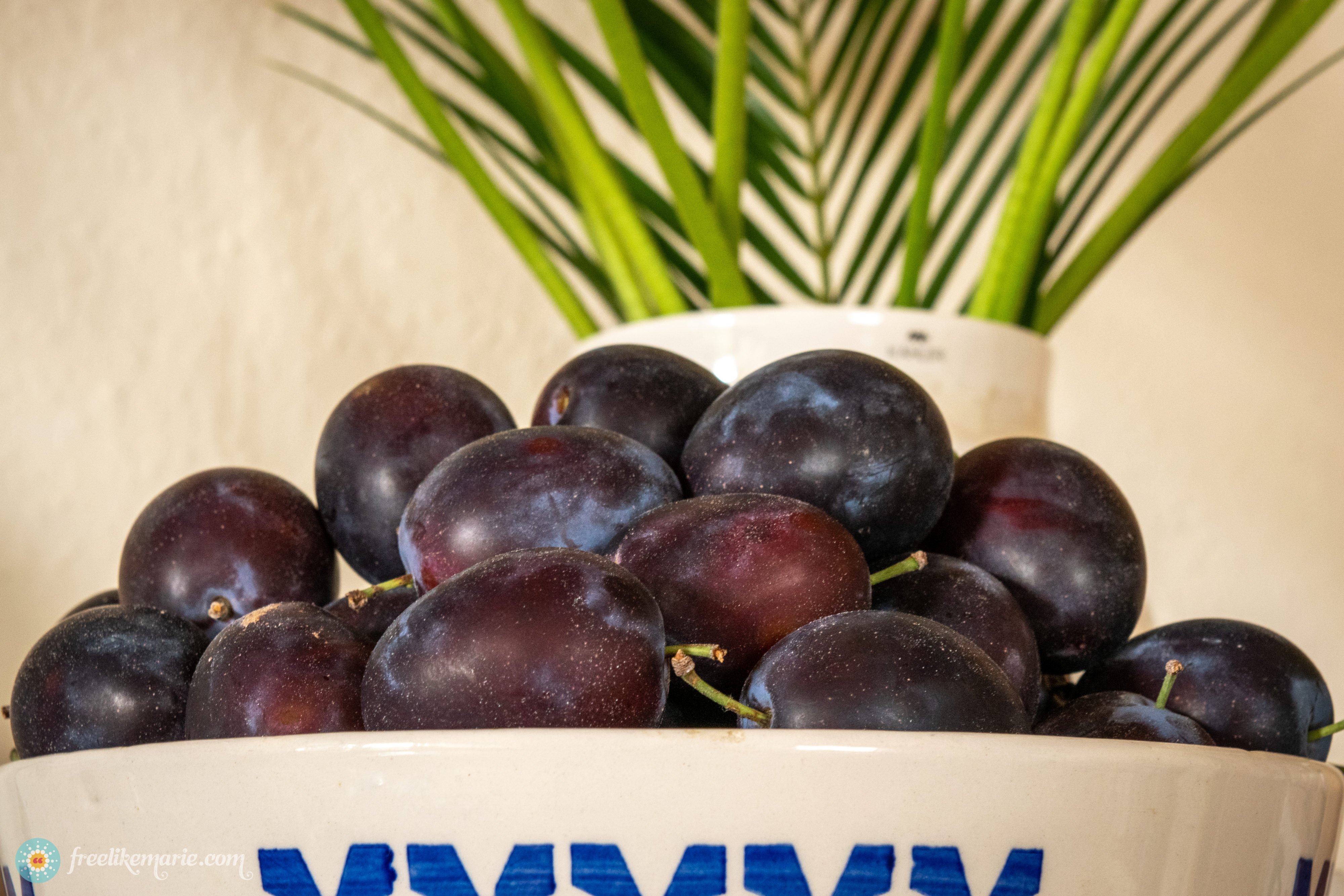 Now Lattwersch is not a German term per se, that would be Pflaumenmus (plum butter). It is a dialectal word used mostly in southern regions and coming in a multitude of variants:

In Switzerland they call it Latwerge, which has a distinguished French linguistic goût to it. Eh oui!

Austria calls it Powidl, which might easily pass as a yodeling word.

In parts of Rhineland-Palatinate it is Leckschmier which would roughly translate as goo-to-be-licked.

Silesians know it as Schmootsch (no, not pronounced like smooch).

And the weirdest-sounding award goes to French regions close to the German border. They call it Quetscheschläggel, and have fun pronouncing that! 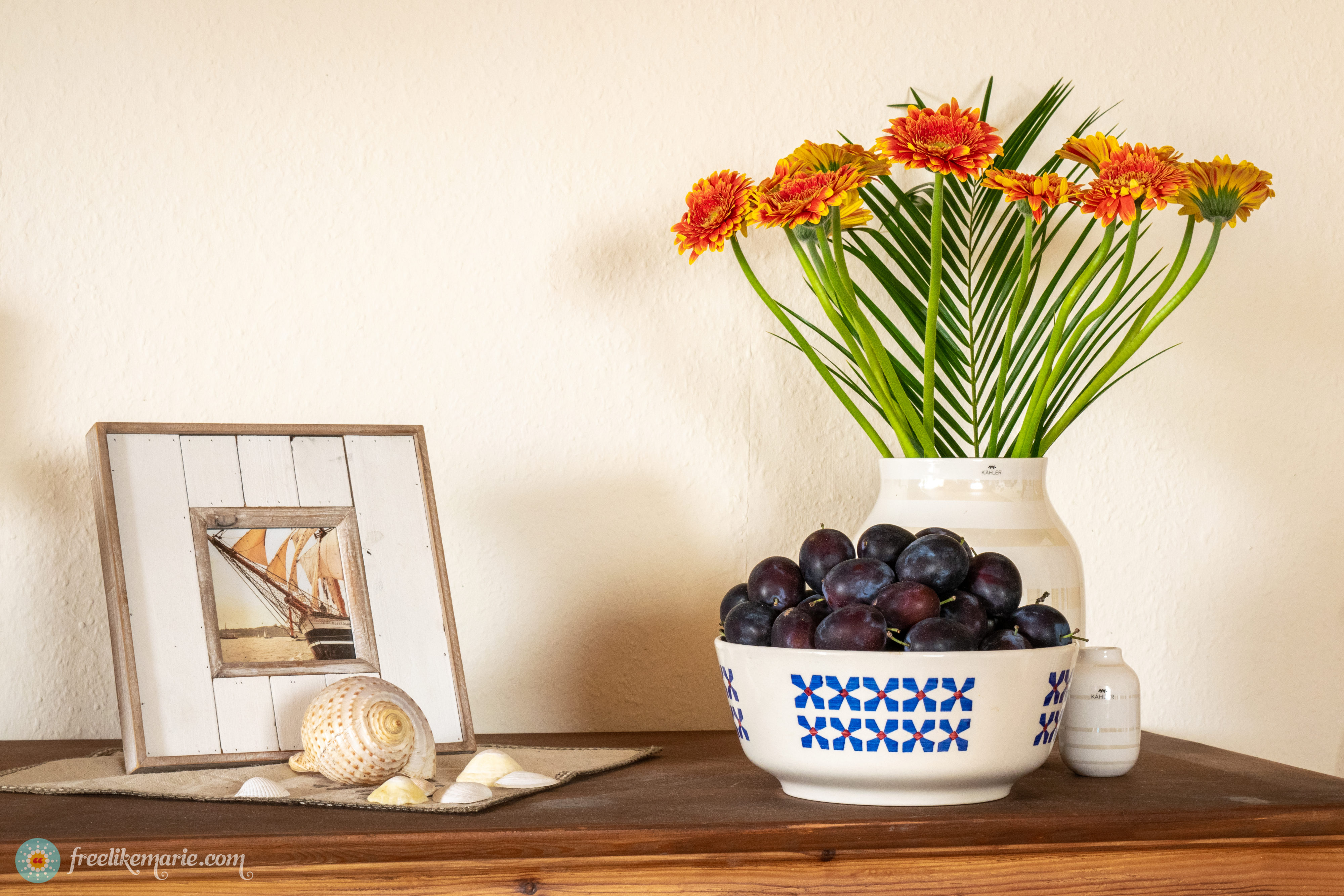 So every autumn (the prunes have only a short season around Sep-Oct) I go into mass production, as my mum, now in her 80s, also just loooves this plum butter. And it has to be enough to outlast until next fall.

(On another side note – “it’s crunch time” in German is “and now we go for the preserves”, which is neatly befitting a plum butter recipe).

Let’s start with a preview of the result to keep you going (did I mention that you need a good chunk of a weekend to make this? But oh so worth it!): 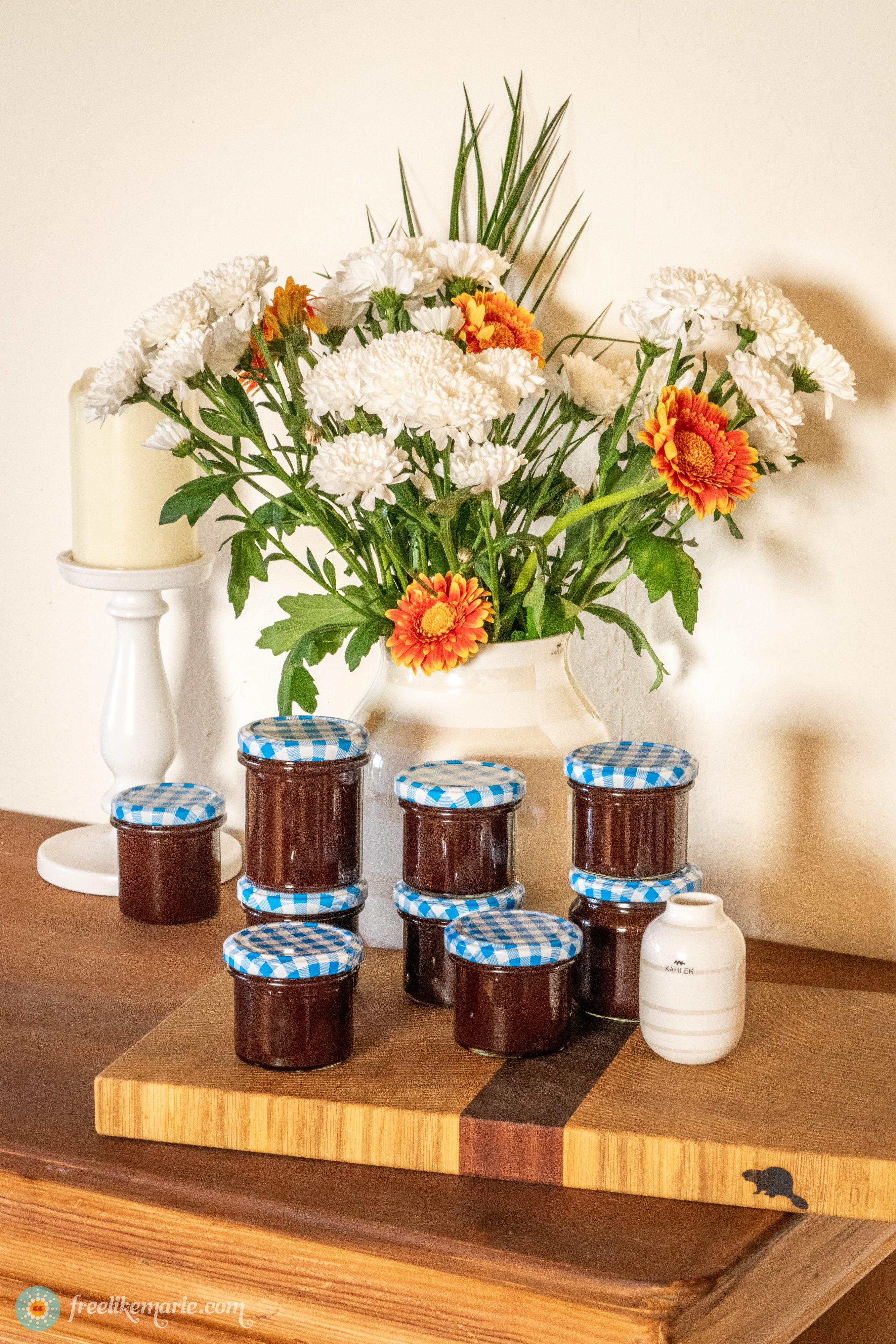 This plum butter recipe will yield 10-13 of those little jars, depending on their sizes.

So here is what you need and how to prepare Lattwersch:

First up: prune plums, aka Italian plums, aka German prunes. Aka plums made in God’s oval-not-round office. Meaning that if you are in countries like the US, you probably have to look around a while to find the oblong fruit (or just simply grow your own).

Unlike their round cousins, prune plums keep their form rather long so are great for baking, drying, or preserving. 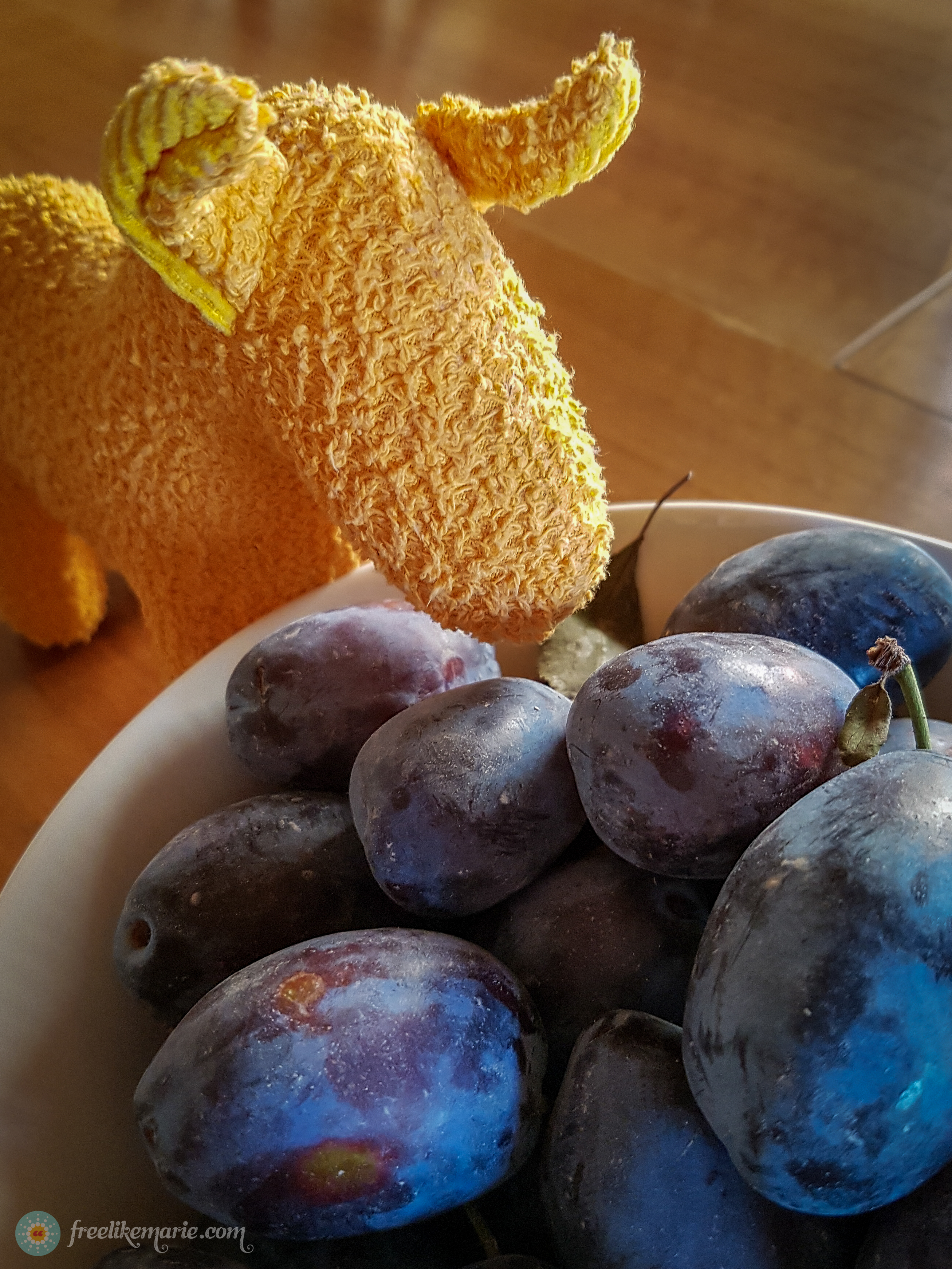 Ingredients for German Plum Butter (which even happens to be vegan!):

3 pieces out of a big cinnamon stick, or 3 small/thin cinnamon sticks, or 1 heaped ts ground cinnamon (though I would always recommend using the real deal, not the ground version of spices)

¾ cup mild vinegar (not the one you clean your sink with, please!)

Salt, pepper (obviously not as much as for a savory meal, just a dash) 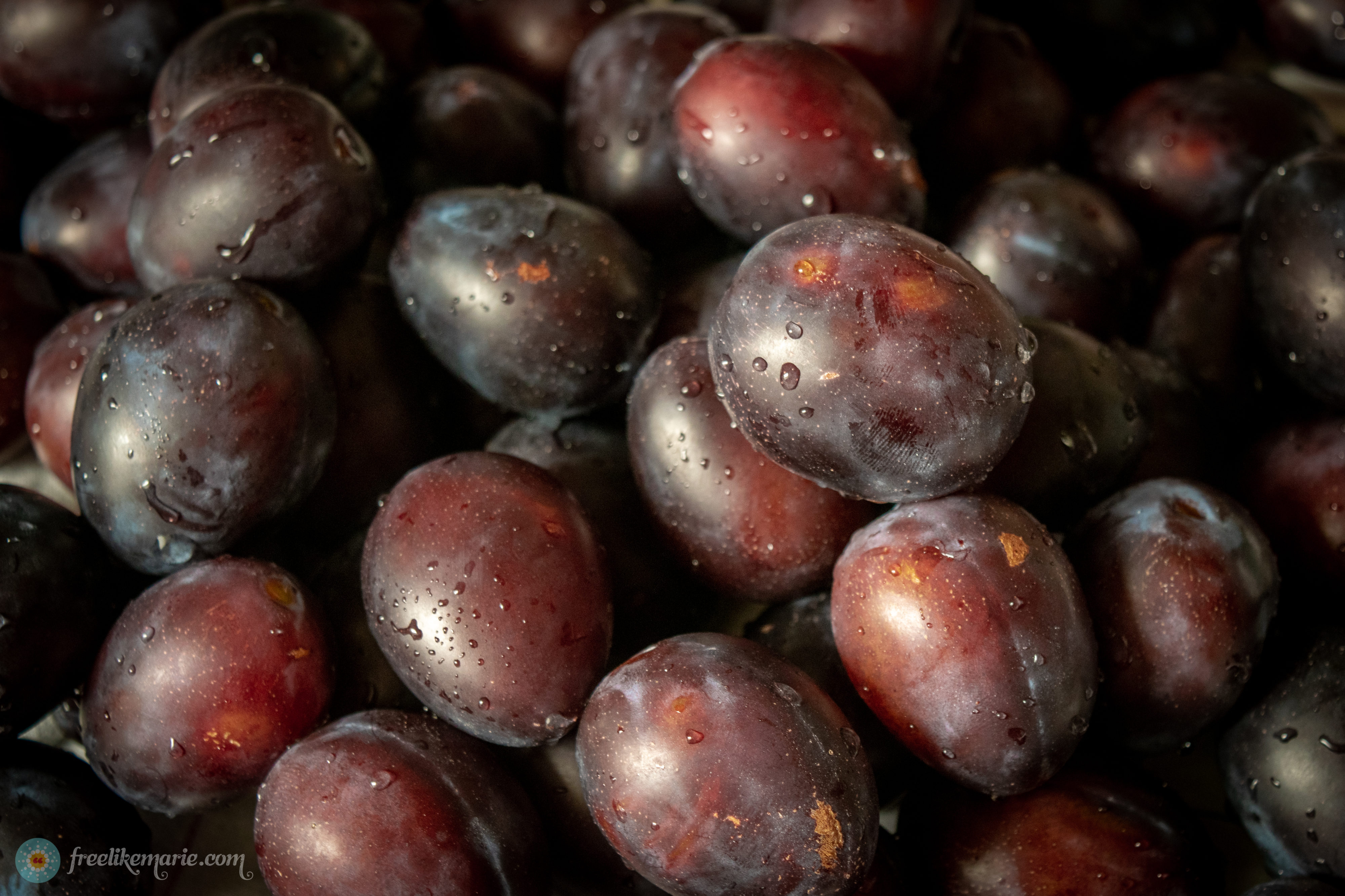 How to prepare your German Plum Butter:

Wash and dry the plums, then take the pits out (yo, time for listening to that 3 hour audio book! Just kidding – but if you have a plum pitter, it is much faster). 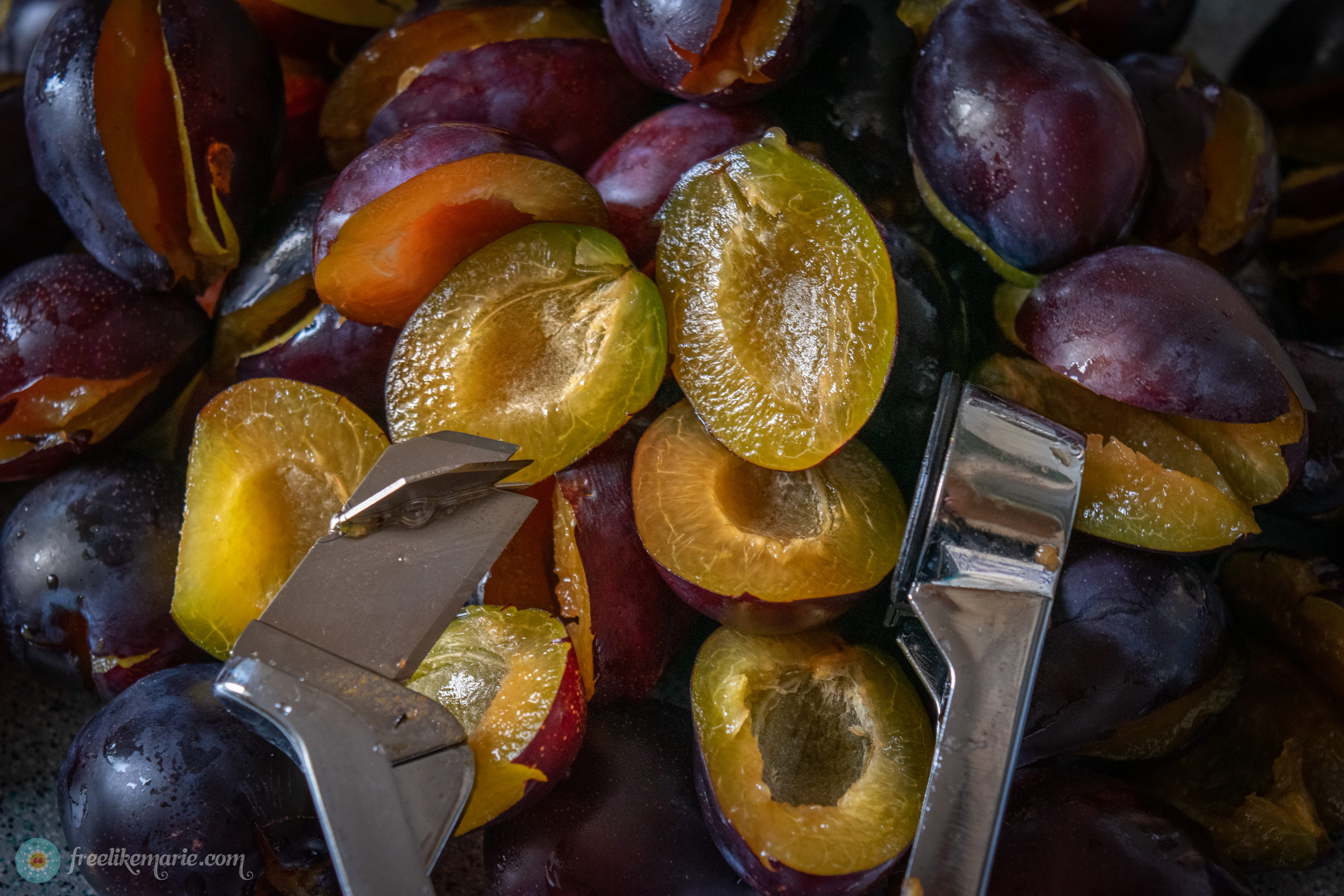 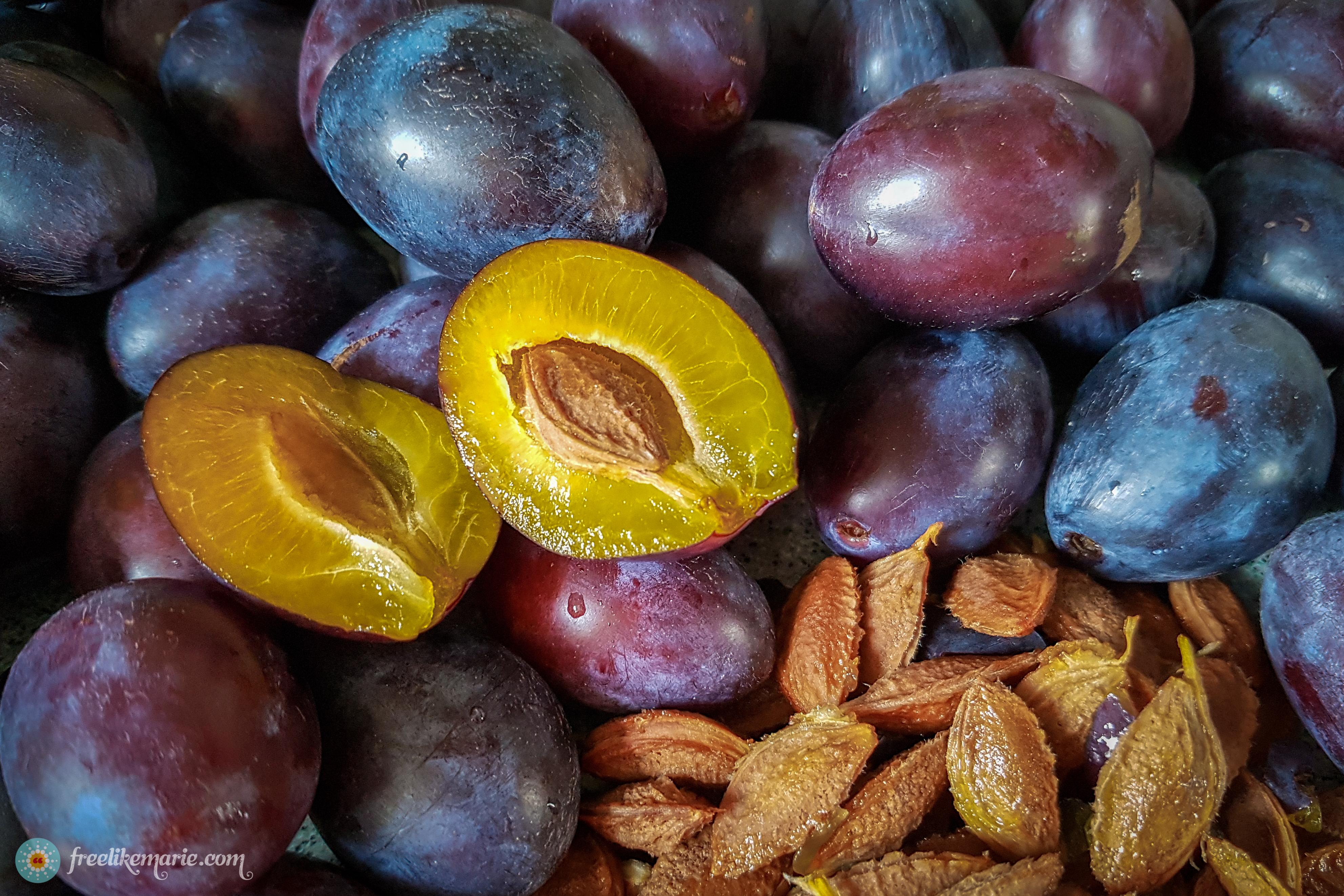 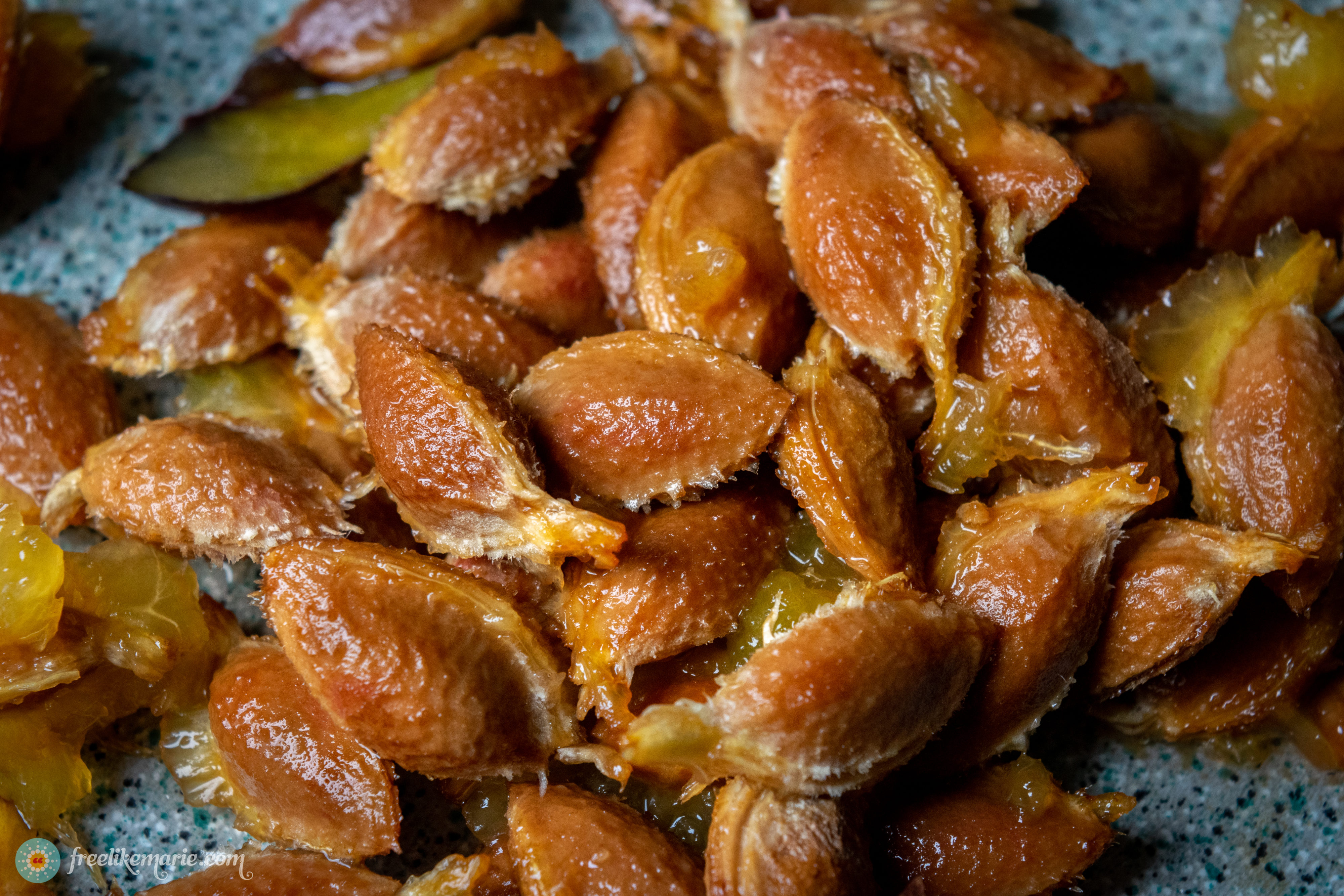 Put them in a large pot.

Spread a (clean) hanky and put the cloves, star anise, and cinnamon pieces on it, then tie it together so you have a little spice bag. Add it to the plums. You might also keep the cinnamon pieces/sticks outside of the bag and fish them out later. 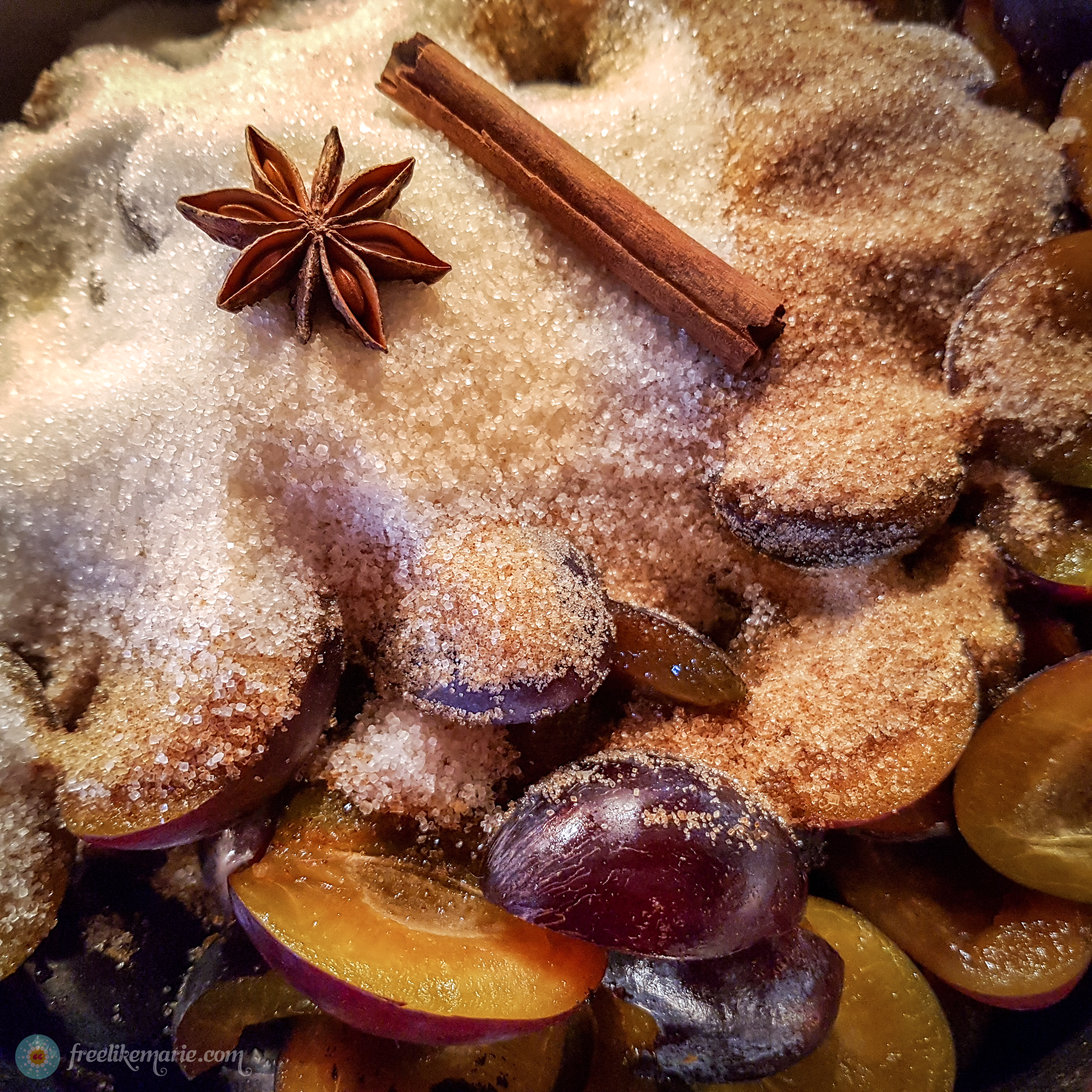 Cut the vanilla bean in half, scrape out the seeds and add them to the pot. Also add the bean halves, so they can boil with the plums for a while (hint: since the mix gets quite dark it might take a while to fumble them out later on. Relax, breathe, contemplate until you find them – a perfect meditation technique!).

Add all other ingredients except the couverture and stir. Make sure the spice bag is down under and not on the surface. Cover with a lid.

Let it rest for 24 hours, or at least overnight and then some. Do not touch it during that time.

Then you can open and stir it and let it rest for another while.

And now: cooking time! Heat on medium, then let boil softly for some hours with the lid on, sometimes stirring. 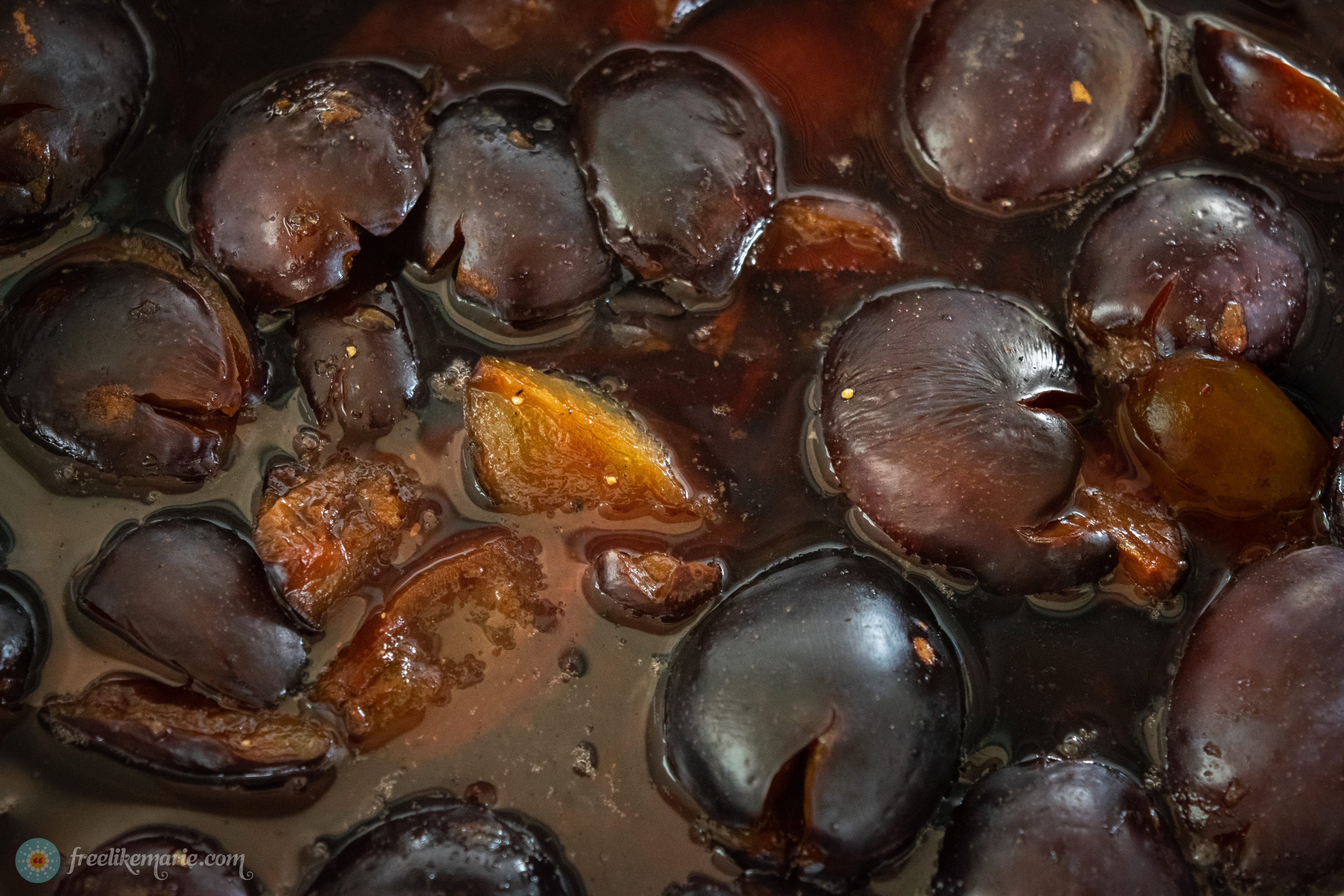 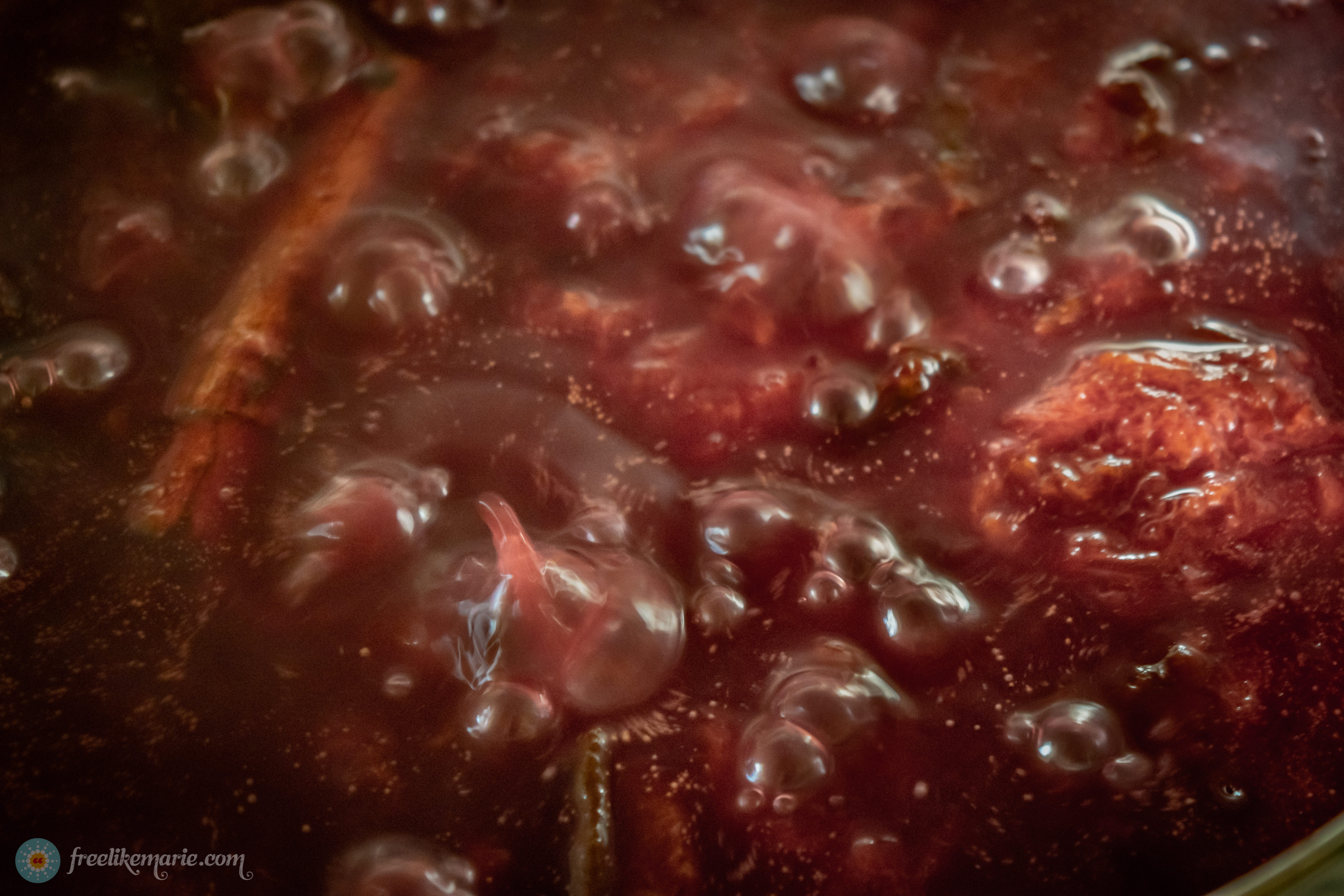 After a while, when the prunes are soft, take off the lid and reduce the temperature.

No, not quite done yet. Do not give up!

Actually, it might be a good idea to profit from those long hours of boiling by preparing a luvverly German plum cake while the concoction is brewing. 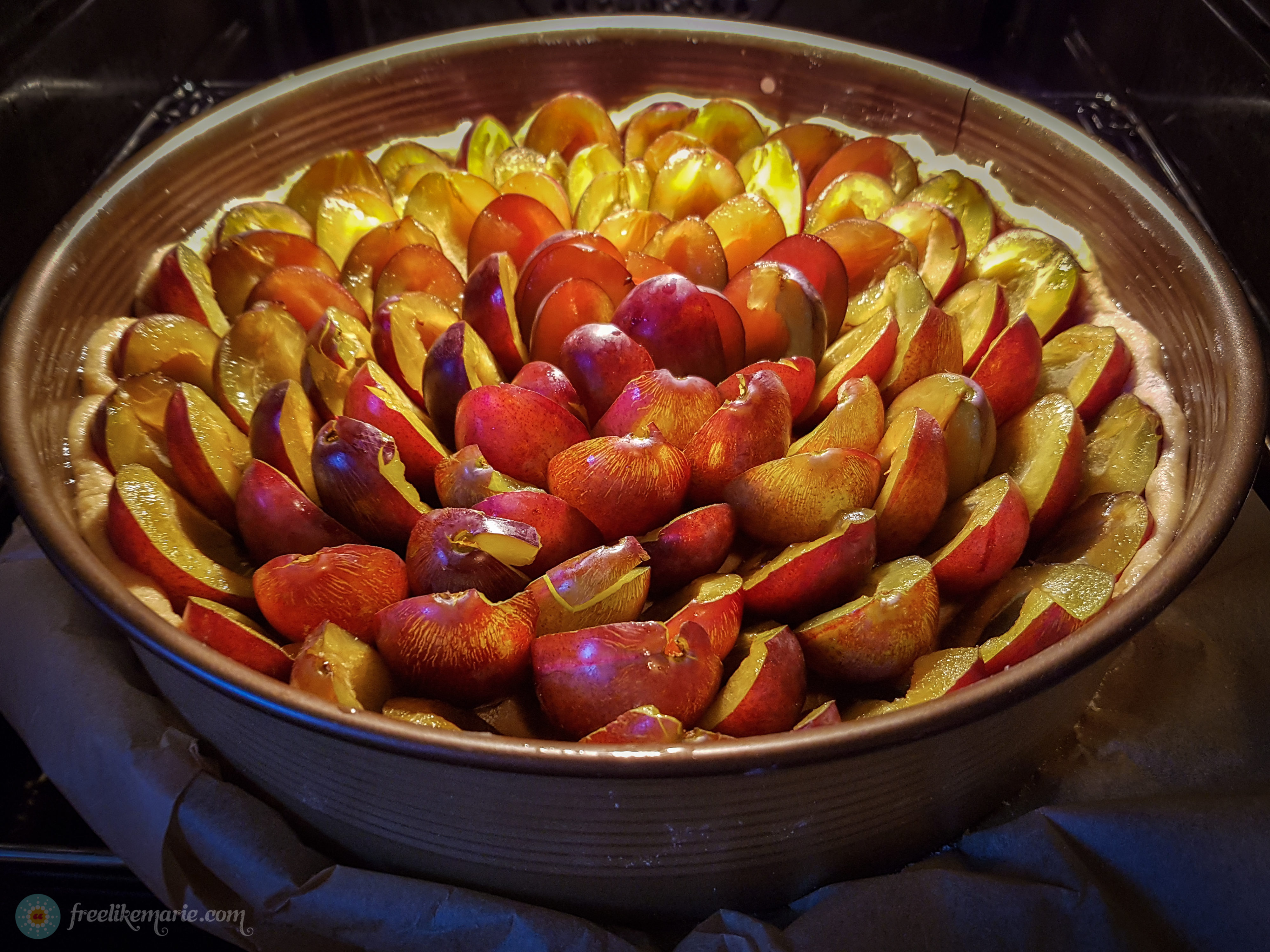 When the pot content is quite mushy, take out the spice bag and fish out the cinnamon and the vanilla beans (good luck!).

Purée it all with a stick blender until smooth.

The stick blender was here!

Add the secret sauce aka couverture and stir until melted.

Then let it all simmer on low heat for another, er, 1-2 hours.

The mass should be reduced by quite a bit. Stir often to avoid burning, sticking, and NSFW deployment. 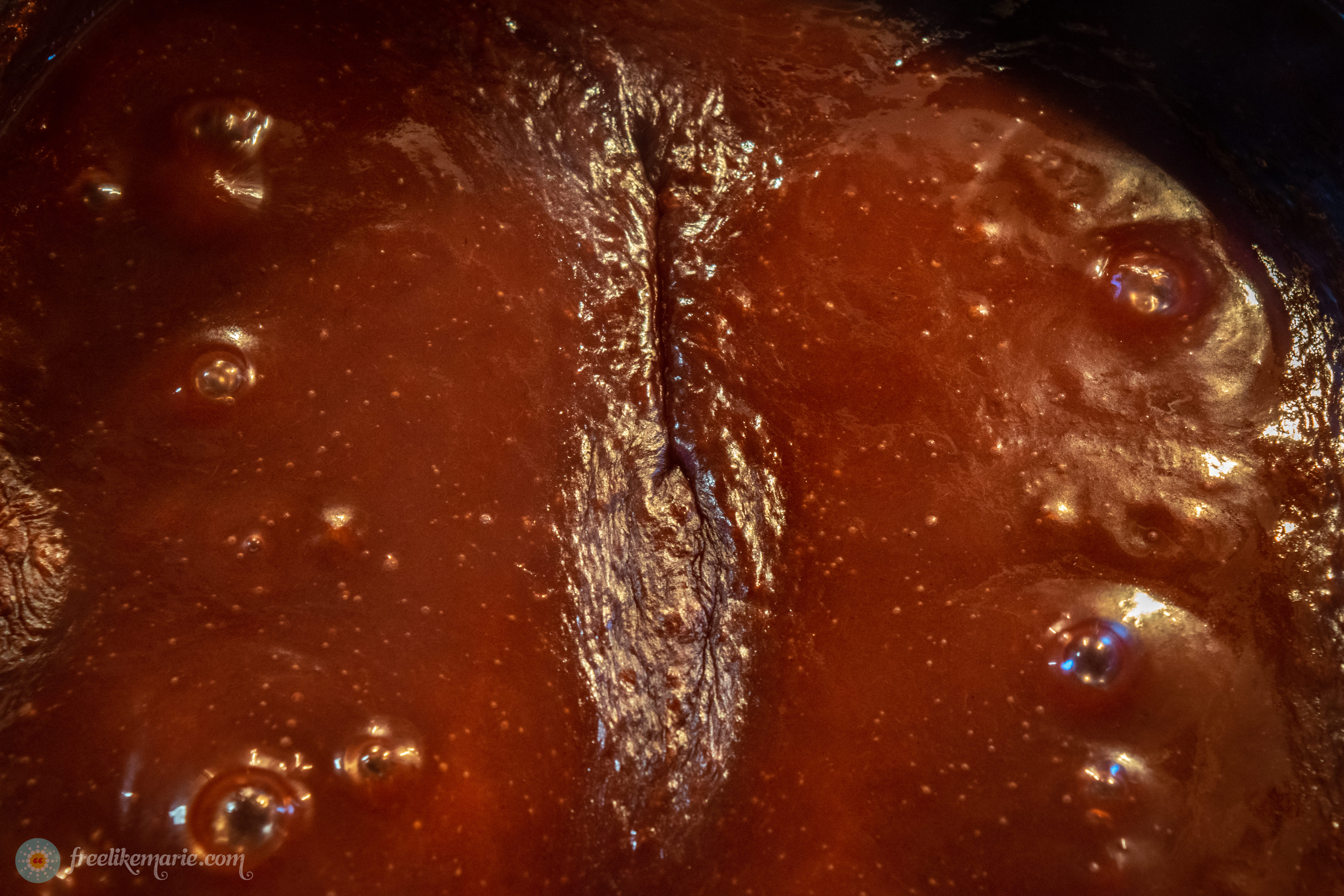 I did not stir for 15 minutes. You would not believe what happened next!

In order to know if you can finally do other things with your life, put a bit of plum butter on a spoon, let it cool a little, then let it drop from the spoon. If it has a viscous texture, i.e. it does not drop like thin liquid but slowly and thickly, you’re good to go. 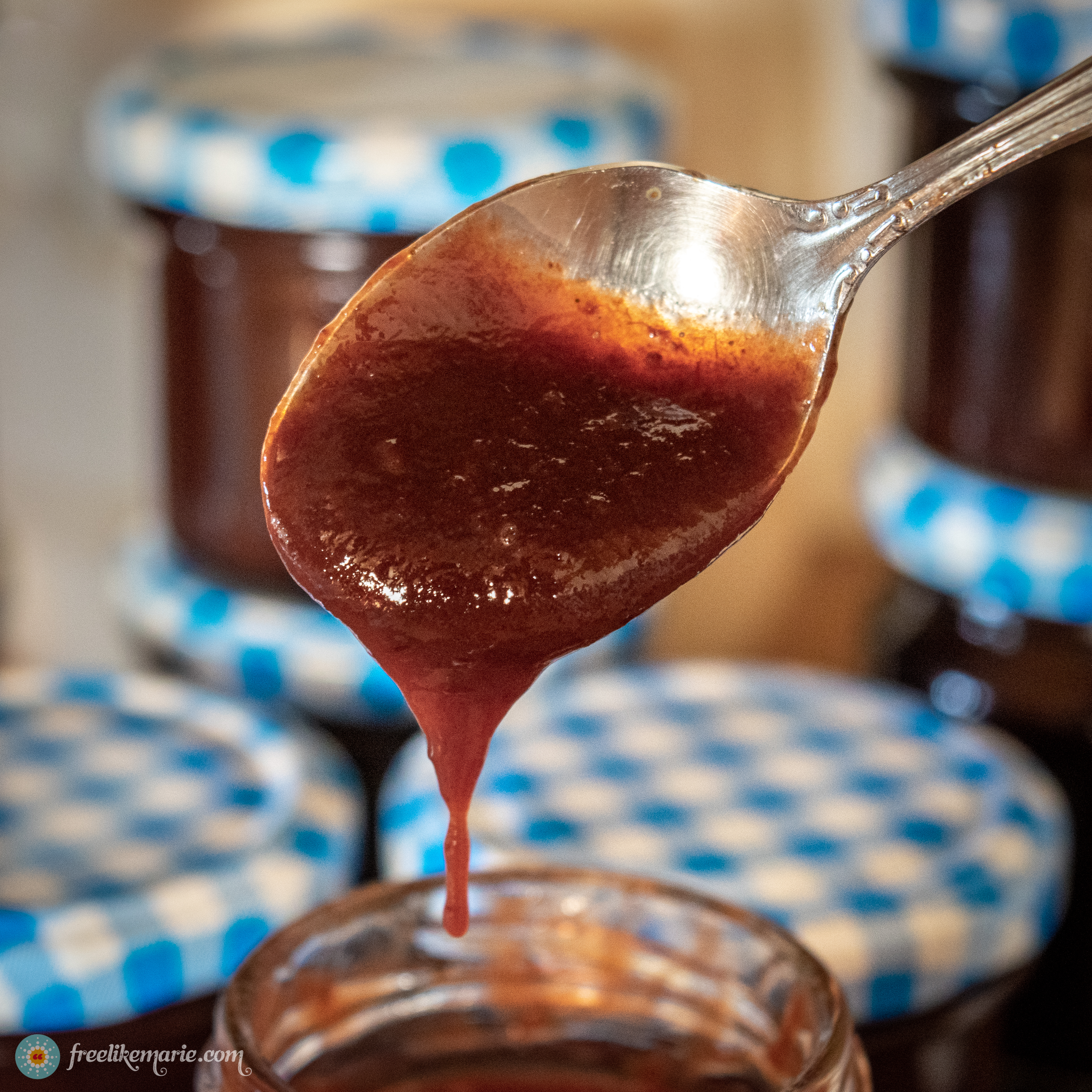 On a drip trip 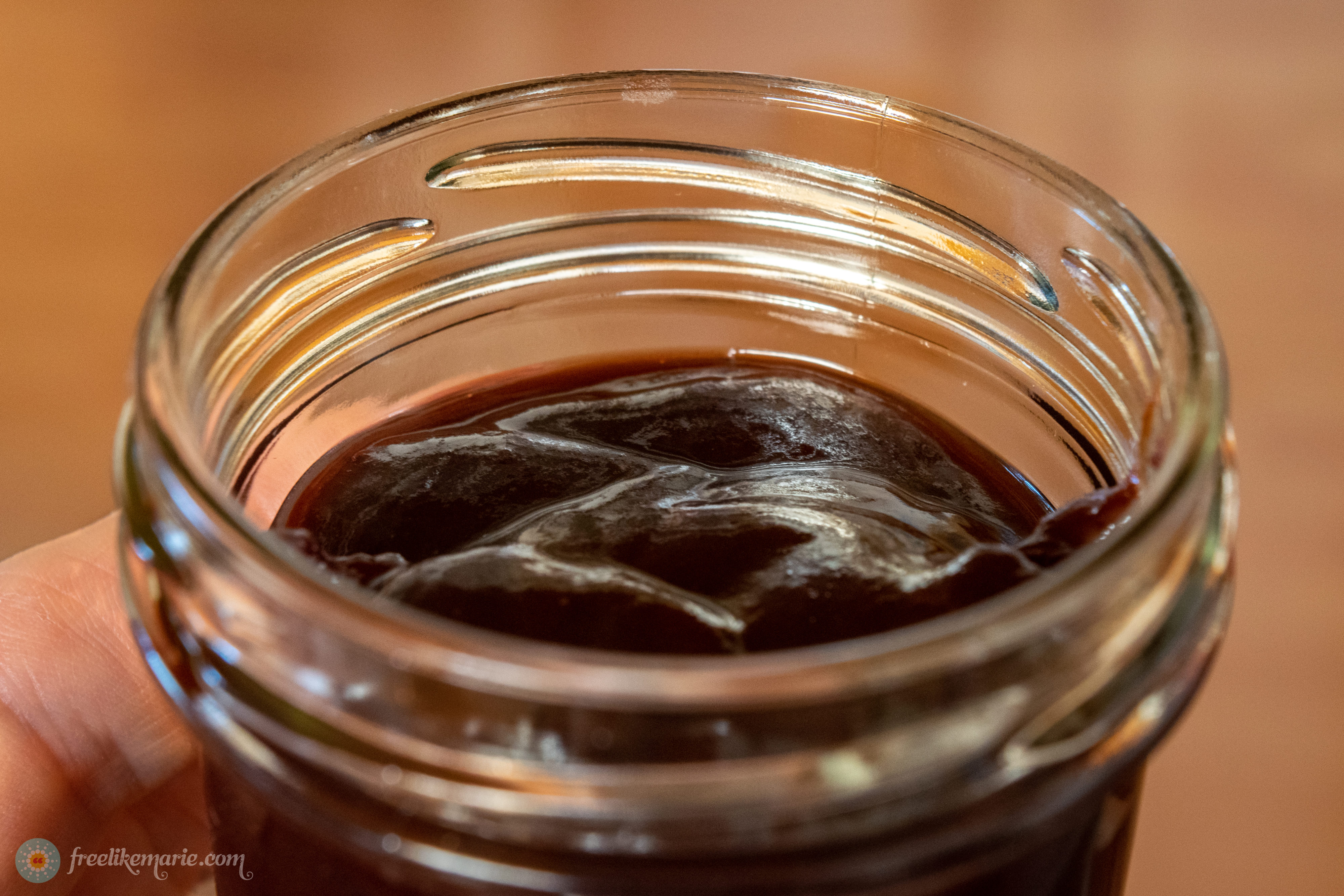 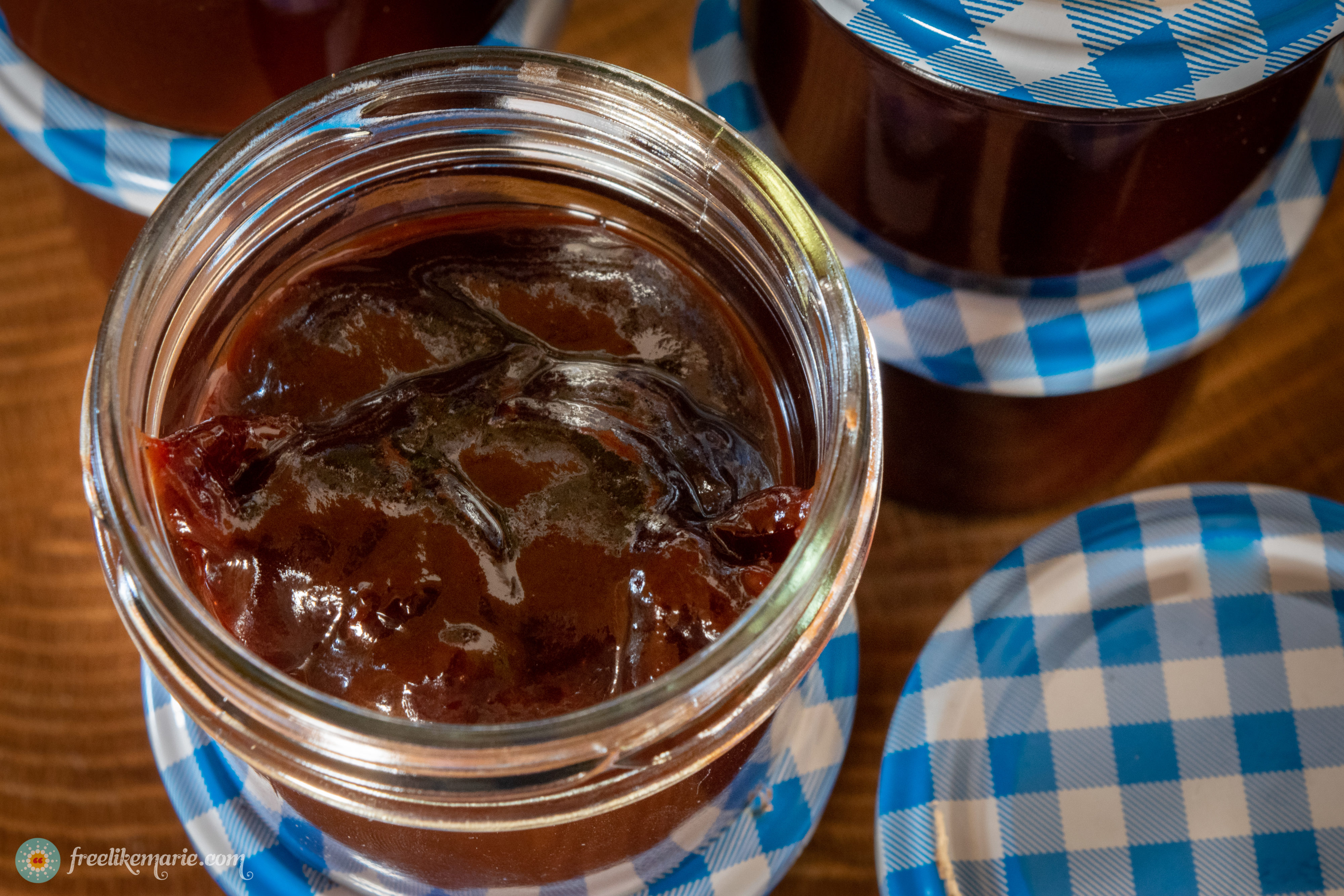 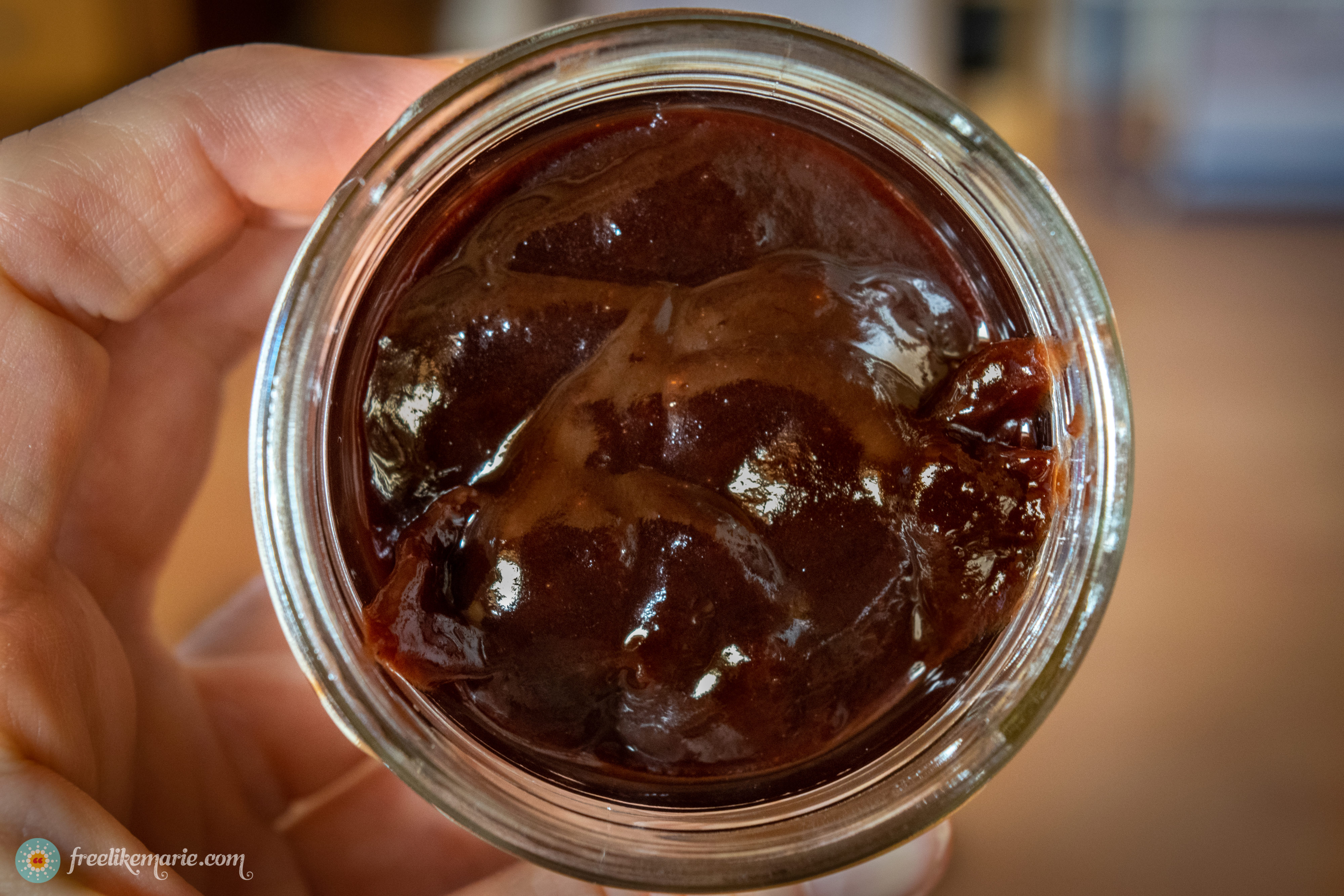 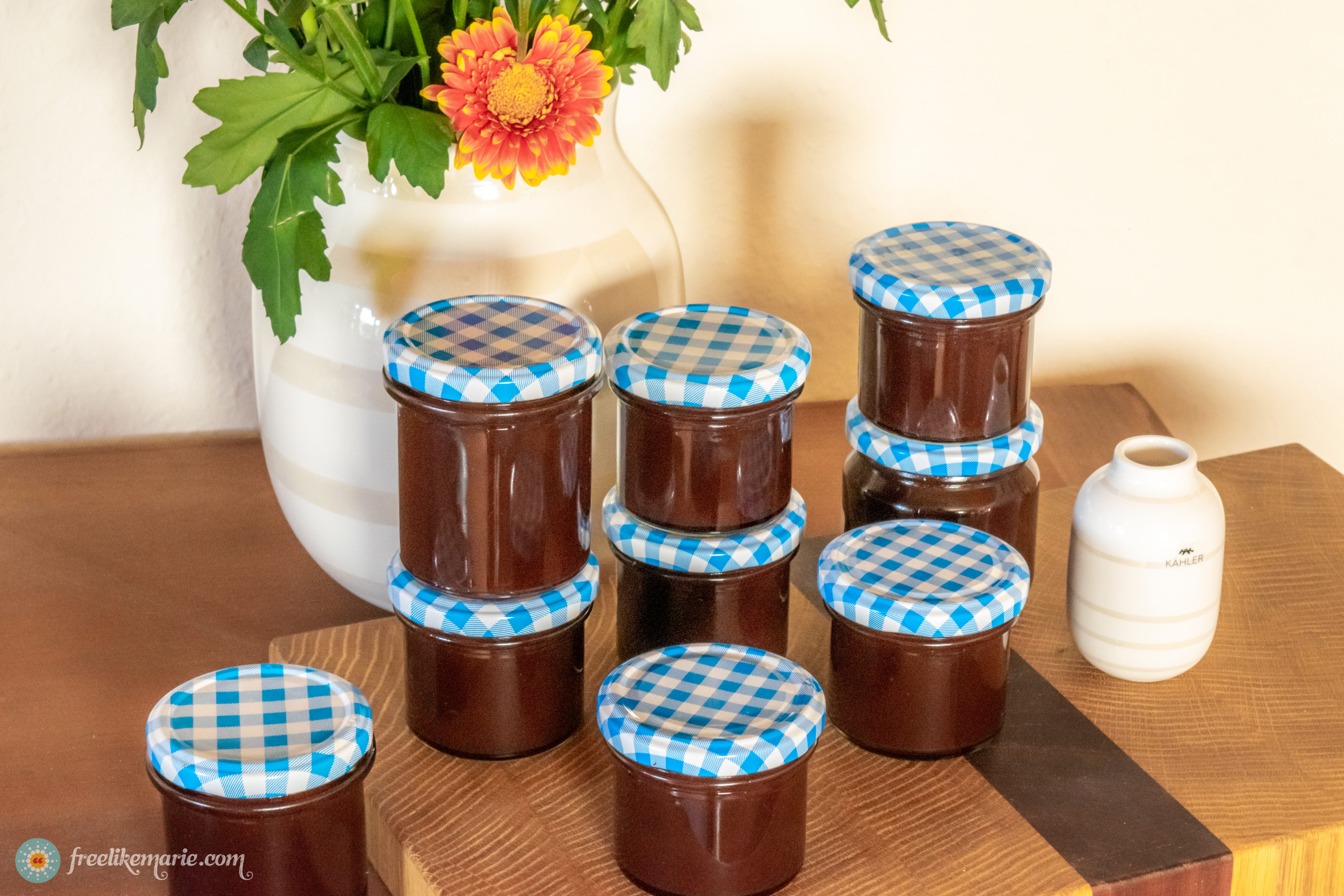 Page load link
Sharing is Caring!
GDPR and stuff, ya know. So we need to confirm your email address.
To complete the subscription process, please click the link in the email we just sent you.
Remember, you can change your mind at any time by clicking the unsubscribe link in the footer of any email you receive from free like marie!, or by contacting us at [email protected]
We use MailerLite as our marketing automation platform. By subscribing to this newsletter, you acknowledge that the information you provide will be transferred to MailerLite for processing in accordance with their Privacy Policy and Terms.
Almost done...
Back to website 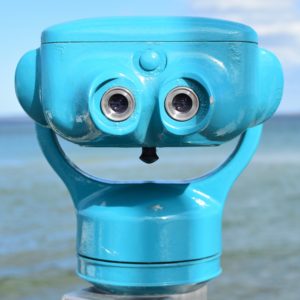 Get Marie's latest travel (mis)haps and moreee with a sunny smile in your inbox!
ATTENTION: EU law requires double opt-in, so PLS CLICK THE LINK IN THE CONFIRMATION EMAIL. Otherwise the subscription is not valid. Thank you!
free like marie! will use the information you provide on this form to stay in touch, provide updates, and for marketing purposes. Please let us know you are OK with the following:
You can change your mind at any time by clicking the unsubscribe link in the footer of any email you receive from us, or by contacting us at [email protected] By clicking below, you agree that we may process your information in accordance with our Privacy Policy.
Subscribe
Permissions
Fine, fine, please subscribe me!
I agree to my personal data being stored and used for distribution of the newsletter.
I agree to receive newsletters from free like marie! with updates, information, offers and promotions.
Go to Top